This anime is also known as The Good Mushishi. I almost wish it wasn’t so. While that descriptor is true, its existence points out the anime’s shortcomings. For all its imaginative moments, it settles into a pattern early on and never deviates. Even the last episodes which aim for some harrowing ends up slotting nicely without breaking up picture.

It’s almost like reviewing Mushishi all over again, but the bigger scope makes Kino’s Journey better with more apparent flaws. Some anime can make it through with a narrow range of emotions, especially if they’re short. Narrow focus on themes is often the source of fantastic exploration of them. By nature, this anime has a wide scope. It follows a person through various countries, each one dominated by a theme. 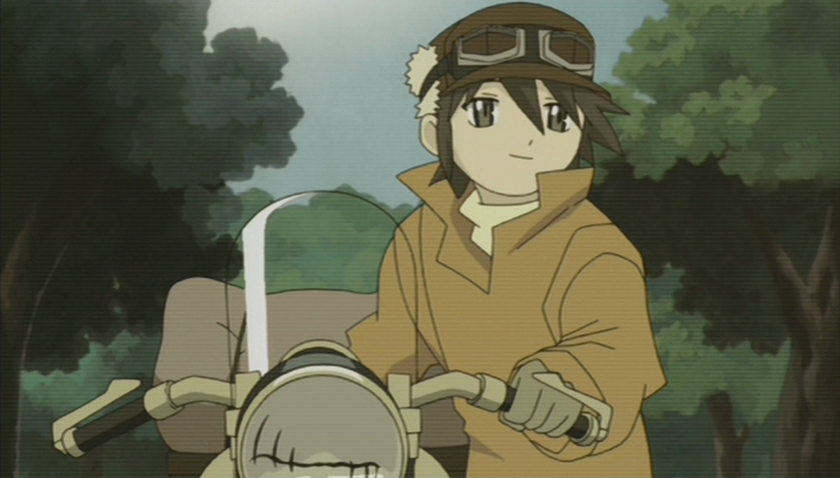 This anime sets itself up to be big no matter what. The stories aren’t small and intimate. They’re more about big issues like war, fate, religion and technology than personal issues. A single character from a country may stick out, but everyone in it are mostly the same person. Such shallow characterization can work, but you need someone to react to this symbolism.

Character’s views and reactions are integral to exploring themes. It’s not enough to just have ‘fear’ or ‘technology’ as a dominating presence in your story. You need to connect it to the human condition. You need to show how it affects the people, how they react to it and live with it. The best stories show us characters in such crises, gain their emotional punch from a meaningful struggle.

Kino is better than Ginko, but she shares more with him and not just a similar name. There are literally less than 5 moments in which some kind of personality is hinted at. Mostly, Kino does nothing but observe. When she acts, she’s pure convenience. She helps characters solve their problems by being nice, but what’s Kino’s stake?

Decisions are another way in which we learn about characters. Decisions that relate to themes are even more meaningful. They illustrate a viewpoint and demonstrate it. Kino makes no choices. She comes to a country, observes what’s going on, does the thing that causes the least conflict and moves on. It’s hard to remember what exactly was Kino’s role in many of these stories. In the last episode, she’s interchangeable with any passer-by. Nothing about her is important to that story, only her role.

That’s a problem you encounter with shitty role-players. A character is far more than their little role. If characters are symbolic of human beings, then human beings have various roles depending on who you ask. Even a soldier trapped in the army will have more roles than just a soldier. He’ll be someone’s good friend, perhaps the commander’s most hated and so on. Kino is defined only by her role as a traveler and does nothing else. A role can be a part of the personality, but we need to see how Kino views traveling. A soldier can be patriotic or just in it for the money. Both are different takes on the same role that leads to different characters even if they do the same thing and come from the same background. The anime never provides a view about traveling. There’s something vague about how the world is both ugly and beautiful and this grey area is appreciated, but what else? What do we do about the grey?

Grey areas are difficult and I don’t expect answers, but great storytellers show me how they wrestle with the themes. If you can’t answer any questions – and you shouldn’t, because there are no definitive answers – at least throw something. A question shouldn’t drag itself for 10 episodes. The series barely asks a question, let alone provides angles to look at it. Asking questions is fairly easy. The difficult part is trying to find the answers. That’s when you deal with the ramifications. No question has an effect until you check the possible answers.

Some episodes provide moral choices for Kino to make. They’re generic, morally clean choices. They don’t reflect a coherent moral worldview. Kino only chooses the least offensive path. She doesn’t even struggling with these decisions. Remember that this character has been around the world and to many different countries. Traveling and experiencing new worldviews should either give birth to a new, original one or leave you confused and full of doubt. Kino acts instead like a cliched ‘wise Zen master’, viewing things mostly through indifferent eyes. It’s believable, but only if there was a worldview behind it.

The series is capable of darkness. An early episode shows the humanity of slave merchants. Even if it ends by vilifying them, it shows how they can enjoy family and raising kids and company just like us. It’s odd that in under 20 minutes they create simple but lively characters. Nothing about the slave merchants is particularly unique, but the juxtaposition of their ‘good’ and ‘evil’ side is effective for side characters. Kino never gets such interesting characterization. In the arena episode, she always offers her opponent a chance to surrender. Why?

The slave merchants aren’t the only memorable characters here. This is where the series trumps Mushishi. Its side characters are driven, sometimes flawed and sometimes immoral. Many of the stories cannot be re-modeled for Mushishi since they deal with humanity’s dark side. The variety in characters and themes also lead to a variety in tones. Although the series is often stuck in its ‘contemplative’ atmosphere – a style which, except for Haibene Renmei, always comes off as pretentious – it experiments with tragedy, satire and adventure. The anime doesn’t dig deep enough. It offers themes but rarely shows their complexity, but the sheer variety of them makes the surface attractive enough.

Some have pointed out that Kino’s Journey is very obvious in its themes. Often characters say exactly what the story is about. In one episode, it’s cringe-worthy. An oppressed tribe literally admits to killing people for the sake of revenge, because oppression. At this point, it’s the artist’s critique of an ideology sneaking up into the character’s mouth. Imagine if a Nazi in a story admitted how wrong Nazism is, but they have to do it because of economic hardships. It’s a lone case. The anime is all surface anyway. The only reason to put things under the surface is because your surface is already full, but Kino’s Journey already has little to say. Such an anime shouldn’t make the viewer put effort. It’s a wise decision to reveal everything, since it prevents an unpleasant air of pretense. The art is decent, with strong backgrounds and decent character designs. The character designs are distinctive enough. Town folks get different looks and important side characters look like they can be main characters in their own show. It’s minimalist almost to a fault – the lack of details don’t do anything – but it finds variety in things like mouth size and eye shape. The backgrounds, while similar, capture a unique feeling. A running theme is the idea of the world being ugly and beautiful at the same time. The backgrounds use a mix of bright colors and pretty shapes with a darkened atmosphere to achieve is. It’s not particularly impressive, but it’s nice to see colors that fit the themes.

Kino’s Journey isn’t brilliant. Its popularity has more to do with it not being traditional, rather than quality. Some people are just dying for something without fan service. I’ve seen anime with weirder premises, deeper psychology and better art. Still, the variety in stories and the thematic focus makes it a show that’s worth most of its running time. No one yet knows how you achieve the greatest heights in art, anyway.

3 talking motorcycles out of 6