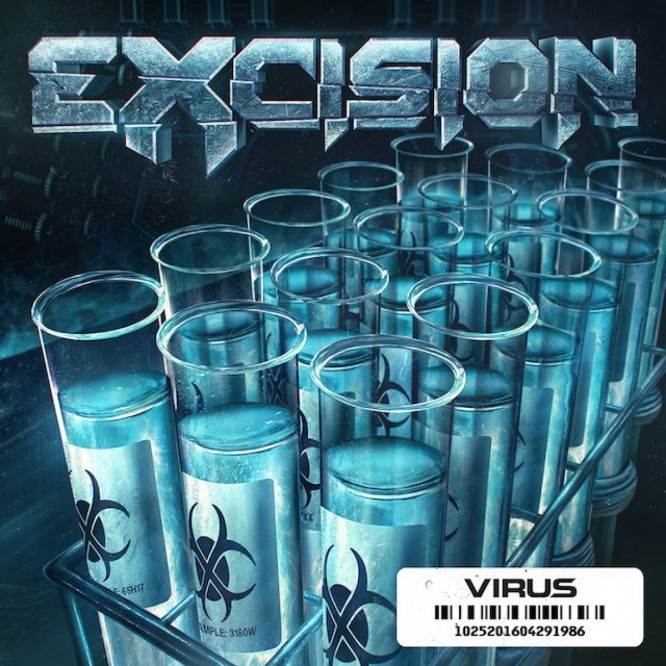 Before we talk about the album, let’s talk about the Brostep. We all know what happened. Along came a loud genre that was popular, so people decided it was stupid. Once everyone stopped with those crappy YouTube remixes of memes, the scene flourished. Excision was integral for the scene. His Shambala mixes were highly anticipated and were a document of where it was at. His two best mixes – of the years 2013 & 2014, showed Brostep turning into something different. It was no longer about plain heaviness, but switching BPM’s and experimenting with odd sounds. When Skrillex collaborated with Justin Bieber, it was expected. That’s how wide-eyed the scene was.

Then something happened to the water all the DJ’s were drinking. Everyone took a step back to a time where it was all about cold heaviness. Never Say Die’s Black Label imprint was a leader in it, and although it had some good releases its influence was incredibly negative. The new producers forgot what made Brostep so appealing in the first place. It’s a Dance genre relying on ridiculousness. The more ridiculous your sounds are, the better it is. The new movement only emphasized some form of darkness. In some ways, it set out to be deliberately anti-Skrillex.

So the result was a lot of dull, heavy and no-fun bangers. The scene stagnated and it’s still in a problem. What should’ve happened a year after Skrillex blew up happened now. Finally, heaviness overpowered it and it’s embarrassing to hear MUST DIE!’s new song with Habstrakt. One of the most inventive producers is now doing nothing but white noise. Sure, there have been highlights. The recent experimentation with Deep House were a success, but overall the scene became monochromatic.

Virus sure feels like it should be the scene’s savior, but keep in mind Excision’s music was rarely as diverse as his mixes. In fact, he was never that diverse, not when compared to Skrillex or Knife Party or these new dudes, Barely Alive. In the current climate, there’s room to worry that Virus would be the finally nail in the coffin – showing Excision completely running out of ideas, missing the entire point and just making a lot of noise.

Thankfully, Virus is closer to getting everything right about a dance album.

In terms of sound, this is still all about brutality and noise. In fact, it’s less experimental than previous albums with no forays into new genres. Drum and Bass is barely here (Only the drumstep thing in “Rave Thing”). House is represented by “Mirror” and other than that, Excision powers through like 2013 never happened. It actually makes him sound of touch. After LAXX and Barely Alive, surely he can come up with some new sounds?

What didn’t change is Excision’s perfect understanding of the genre. Where he differs from the new boys is that there’s no posturing here, no attempt to sound cool by turning the sounds down low. In fact, Excision plays this record like 2015 never happened, either. It’s soaked in the mid-range madness of 2011, when it was all about roaring and being ridiculous. How else can you explain “Rave Thing”? It was out of place back in the 2015 mixes, where it roared and wobbled while everyone just growled. It’s a track that constantly ups the ante, that takes the most parody-esque elements and exaggerates them. As an attempt to out-Skrillex Skrillex, it’s quite brilliant.

Virus reminds me of why I love the genre it’s the first place. It’s so ridiculous, so oblivious to classy dance music. “Neck Brace” has Messinian, and he roars more than he raps. The drop imitates machine guns, but the sounds is right between midrange and low-range. “Harambe” literally stomps like a gorilla while alternating between the sounds of its 3 producers. “Throwin’ Elbows” shows Excision can still mine this style for new sounds. At this point, he doesn’t pretend to be concerned about rhythm. The drop consists of what sounds like laser beams shooting and the sound of reloading. As for “The Paradox”, it’s a brave attempt to make a defining song. Something is missing – it doesn’t as ridiculous as it should – but it would be an attention-grabber in any mix and would require an immediate change of BPM.

A dance album can’t rely on a single idea though. Even Dance artists whose genres are defined by heaviness switch it up. What’s odd is how Excision does these switches. There’s a foray to House in “Mirror” which borrows from the whole ‘bass house’ thing, but it’s not too alien. Excision is finally comfortable with guitars. They’re not sampled any more. “Throwin’ Elbows” is loud as hell, and can “Death Wish” be classified as an EDM song at all? It’s a Rap song with guitars for a chorus. Sure, there are Trap drums but the guitars play riffs.

The oddest excursions are to the sort of melodic Brostep most producers stick for tokenism. Excision now throws himself fully at them. There are 3 such tracks, and for once they have a purpose other than offering a break. “Drowning” has a glacial, sad quality to it. Compare it to “With You” which appears near the end. The former song doesn’t actually have a melody, but sound design meant to create atmosphere. “Her” has Dion Timmer’s chimpmunk vocals singing about a heartbreak over a weird drop. It’s somewhere between melodic and wobbling, creating this odd feeling of heartbreak and acceptance. It’s an odd moment of beauty that’s rare in the genre.

If you look at the tracklist you probably wonder how can you sit through 16 minutes of Brostep. It’s quite easy, actually. Making a dance album isn’t too hard. All you need to do is make sure everything bangs and there’s enough variety. All the brutal tracks bang, and there’s enough offer a break while keeping the rhythm going – “Are You Ready?” is the only attempt towards contemporary Brostep and it’s a nice stepdown, and while “Mirror” isn’t as good as his other House tracks it’s a welcome break. The only problem is putting “Harambe” as a closer, especially when “The Paradox” is right before it. The latter is epic, huge and roaring. It’s a climax. “Harambe” stomps like a mid-mix banger, a track that comes with no build-up and immediately locks you in its groove. As a closer, it’s perhaps the worst song.

Virus isn’t exactly what I want from Excision right now. I want to see the genre expanding, mixing with others and creating one of the most vibrant musical movements. Excision is still content in the midrange, but at least he backs up his obsession. When it comes to loud, midrange Brostep then all I want are tracks like “Neck Brace”, “Harambe”, “The Paradox” and “G Shit”. Hopefully, this will spread and the new riddim movement will die.