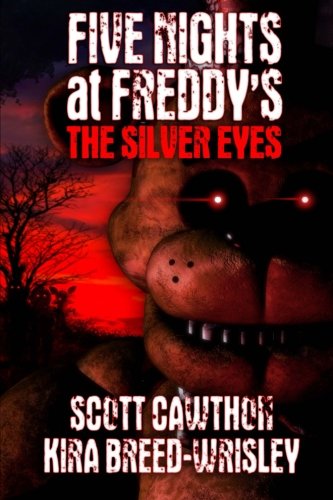 There has been a lot of transitions from video game to literature. Many were bizarre choices. Were people really interested in the stories behind Halo? Didn’t it mainly exist for multiplayer? Even video games that had potential are mostly better off as pulp adventures.

The Freddy’s franchise has potential. The game is like no other. It’s not just scary but brilliantly designed and deeply psychological. Shitty YouTubers couldn’t ruin what is one of the most original games, the kind that doesn’t rely on advance technology. It’s a prime example of how video games can be an art.

Thankfully, Cawthon isn’t an exploiter. His approach to horror is unique and not just because of the lack of gore. The sequels elaborated on the themes and ideas of the games, rather than just up the shock value. The transition to other forms of media was inevitable. There was so much you could do with it.

Sadly, The Silver Eyes isn’t the novel the franchise deserves. To Cawthon’s credit, it fails mainly because it reads like a first-timer. The novel actually does try to push the franchise into a new direction. Cawthon does try to humanize the story and give us fully-developed personalities. He’s just not sure how to do with it.

If the failure of the novel surprises you, keep in mind this is completely new territory. Cawthon dealt before with general psychology. He never had to create specific and diverse personalities. Here, he’s faced with a challenge of creating a cast and giving each of them a different personality.

He tries, but he stumbles. It’s amazing how a novel can be at once character-driven, and yet not develop any of its characters. The reason it takes so long for action to happen is because the story isn’t all action. Cawthon is aware jumpscares weren’t what made the game great.

So he spends a lot of time with these characters, having them interact and show us their relationship. Sometimes it seems like it’s just postponing the moment the slasher comes alive. Then you notice Cawthon lingers on it for too long,

He’s not catering to the target audience. He spends so many pages with these characters because he’s trying to inject a face to the franchise, but nothing happens. None of them come alive. Our protagonist is the worst. There isn’t even a hint towards who she is. She’s your generic protagonist who just observes the events and acts like she should.

It’s when the novel goes to the franchise’s main themes that it improves. The main idea behind the games wasn’t horror. It’s growing up, realizing our childhood wasn’t so glorious. It’s the difference in how children see the world and how grown-ups. A description of a house early in a novel, how it decayed and how the toys are still there is powerful. The descriptions contrast the decay with the toys. They also point how the toys were never much in the first place, but just robots.

There aren’t enough scenes like that. The novel gets especially lost in the middle. Although it never slides into cliches of horror, it doesn’t know how to translate Freddy’s brand of terror into words.

The horror of Freddy’s came from not knowing. There was no gore in that series. What made it so scary is the fact we never knew what was going on. We didn’t know why Purple Guy killed those kids and we don’t see the animatronics move.

It may have something to do with the writing style. It’s not terrible, but it’s generic. Sentences lack a unique structure or tone. Similes appear from time to time, not too much to annoy but there’s nothing unique about them.

Literature isn’t just a collection of facts that form a story. You’re also supposed to use a style of language that will fit your story. It’s just like how visuals in a film don’t merely give us a setting. They don’t just show us the layout of the house, but how it’s decorated expresses something.

To his credit, he tries to do things his own way. They hint at a romance but never work on it. It wouldn’t belong, anyway. Characters that can die aren’t killed, so we’re not given a cheap death to heighten the excitement. Even the grand death of the bad guy isn’t narrated in gory detail. Fans of the game know how it happens, and just like in the game we only get the basic idea of it. The rest is up to our imagination.

The desire to go in a new direction backfires too often. Lack of cliches is fine, but the novel isn’t as weird as it should be. The lack of the Puppet is also disappointing. He’s the most frightening and mysterious thing in the series. It’s nice how the horror and mystery have a more thematic importance, instead of a puzzle for a reader to solve. These routes aren’t developed enough.

It’s a decent novel. It avoids the pitfalls of a transition. The story stands on its own and it’s written in a way that’s accessible for newcomers. It’s meant to be a stand-alone horror story and doesn’t have fanservice. The themes of the franchise dominate it – childhood and growing up – instead of the stereotypical jumpscares. The novel reads too much like a first-timer. Cawthon needed help from someone more professional. Still, it’s good to see him stretching himself. So far, he’s pushing the franchise in new direction. If it fails, at least it’s not because of a re-hash.