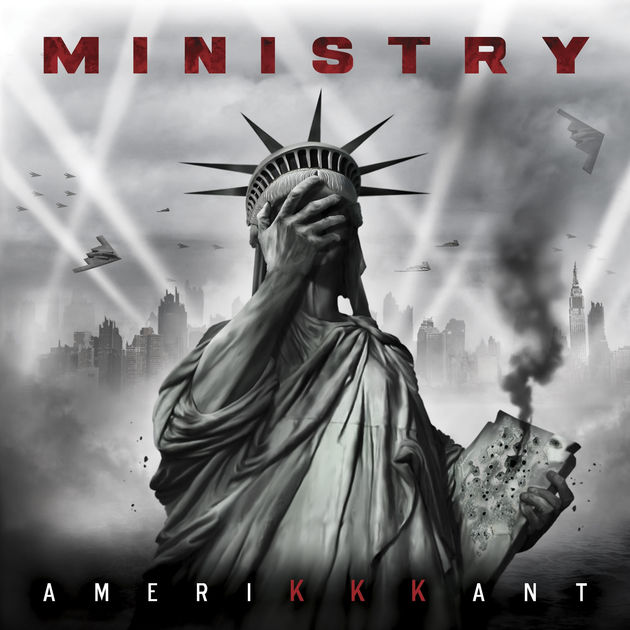 Ministry is extremely stupid. Al, if you’re reading this, I think you’re insanely talented. You crafted one of the most unique sounds in Industrial and left most Metal bands in the dust. At their average, they captured the rusty, nihilistic, borderline satirical tone that Industrial music always aimed for. You don’t need their best tracks to hear metal that does sound dangerous and threatening to destroy the world along with itself.

The Bush trilogy is stupid, but it was powerful. The lack of insight into politics or the stupidity didn’t stop tracks like “Gangreen” to have power in how much bile and hatred they express. “Worm”, a fantastic display of depression could only come from a political record that’s full of fear and paranoia. The last album in that trilogy was surprisingly good. If the Bush triloy lacked any insight, it was powerful in capturing the emotions of living in such constant fear and hatred of the government.

Oh, but how stupid is Ministry! They can’t write songs. They create loops which beat you over the head for five minutes. That’s why Ministry were always a Dance act more than a Metal act. Verses and choruses are alien creatures to their music. It’s all about the loop that can keep people dancing, but often that loop didn’t change. So Ministry’s songs tend to exhaust themselves after 2 minutes. Exhaustion is another central theme of Ministry’s later works, so overall perhaps it fits.

Seriously, though, how stupid can you get? How stupid can you get with such a fantastic talent and sound design? AmeriKKKant is a moronic album. I mean, look at the title. It still thinks it’s clever to spell ‘AmeriKKKa’. Al is definitely late to identity politics, but hey it might sell records! The songs still consist of endless loops of the same thing. This time, it works a little better – thanks to turning to sludge – only there are so many terrible ideas in between it’s easy to forget that pretty awesome guitar solo that closes the album.

Why oh why did we need “I Know Words”, which is Trump’s vocals scratched and chopped to some fiddling in the background? It sounds like a Nurse With Wound B-side, or at best a stolen section from one of his songs. As an intro, it’s too long. As a 3-minute experimental piece, it goes nowhere and has no reason to take up so much space. Later on we get another interlude with the wasted title of “TV 5/4Chan”, which juxtaposes right-wing vocals with some noise. What does it mean? I don’t know. Right-wingers are pretty bad and are on 4chan. Ministry writing a song about the idiots of 4chan would’ve been actually nice. Maybe someone should take an axe to that meme culture, but sadly Ministry missed their change.

As for songs, the first singles are the worst. “Antifa” has been beaten to the ground and it will never get old. The song chugs along with indifferent riffs. The chorus is Al roaring “We’re not snowflakes, we are the antifa” without any hint of passion or anger or fury or anything. Even in terms of pure sound the song is bad with how dry and hollow the production sounds. “Wargasm” isn’t as stupid and it has a chorus – rare in Ministry’s catalogue. Sadly the song also chugs along with little passion or fury. Al sounds tired. At least at their dumbest, Ministry was furious. “Wargasm” lacks all that. Shouldn’t he be excited to make something other than Thrash metal?

What makes all this more frustrating is that there are hints of a bright future for this band. Although the highlights don’t have Ministry’s fury in the Bush era, “Twilight Zone”, “Game Over” and the title-track are all borderline excellent. Moving to more sludgy metal, sampling like hell and DJ scratches all help to create a suffocating sense of apocalypse, paranoia and general depression from the end of the world. It separates itself from the Bush trilogy by having zero hope. If the Bush trilogy had a warlike spirit, a character to direct anger at this has none.

“Twilight Zone” would’ve been a closing track in past Ministry albums. Now it’s the first actual song. It doesn’t even have a proper riff, but a slow, crumbling sound design that plays like the apocalypse. Sure, Trump is sampled and make fun of, but it’s no longe the direct hatred of past albums. Everything is bad and there is no light. It is a direct sequel in spirit to “Worm” and “End of Days”, combining the depression and the apocalypse. Time will tell how strong it will stand, but it just might enter into Ministry’s greatest hits. “Game Over” and the title-track aren’t too different, but they do the job right and added some much-needed melody.

These are only 3 tracks out of 9. Then again, 2 of the 9 tracks are just interludes. So we’re left with an odd feeling of a very short album that runs for too long that has few ideas and not enough time to work on them. “Victims of a Clown” is a 4-minute catchy rocker that’s stretched for no reason for 8 minutes. The most telling track is “We’re Tired of It”, a return to Thrash that really does sound tired with a horrible, toothless production job. The walls of sound in “Rio Grande Bloode” were enough. This one has none.

People continue to beat Ministry for their stupidity and perhaps we should continue. Stupid ideas flood this album, from stretching “Victims of a Clown” to the interludes, to the first singles and the overall production job. Yet the solo at the end of the title-track and “Twilight Zone” prove Al still has talent in him and it’s a talent no one can capture. Most Industrial Metal bands either replicated KMFDM or Marilyn Manson and Ministry could continue with all the changing members because Al does have a unique vision. I only want him to finally be able to realize it without all the stupidity clogging up their albums. At least this gave me 3 tracks to add to the Industrial playlist.