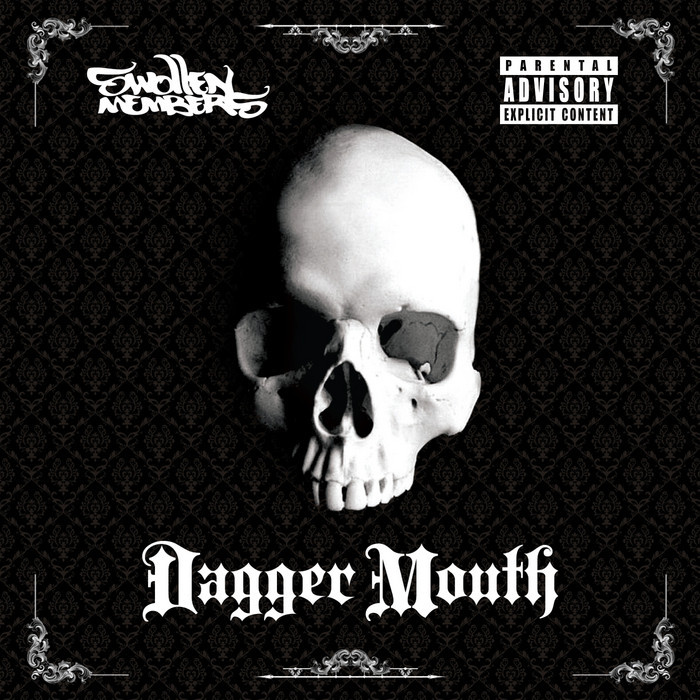 This can’t help but feel like an apology for their previous, atrocious album. For an album that’s so apologetic it also sounds like a roaring comeback that threatens to be their defining work. It’s an odd contrast that doesn’t really make sense and makes you wonder what Armed to the Teeth was all about anyway if they’re doing the complete opposite here.

Swollen Members are about classic Boom Bap only with more charisma. Instead of mumbling about New York and other such cliches, they flirt with horrorcore while never becoming as obnoxious as Necro. This versatility let them either slide completely into the genre, take it into more personal places (“Bad Dreams”) or to just expand beyond the typical boundaries of Hip-Hop. That’s why Black Magic is so good and why it received such a lukewarm reception. Before Kanye West’s new found fame, the only way to make an acclaimed album was to imitate crappy New York rappers I won’t bother to name.

So when they dropped Armed to the Teeth, it made no sense except that the people at Subnoize used it as a device to spread their misogyny. While the addition of guitars were cool, tracks like “Porn Star” were not. It’s exactly what I feared and what we got. For some reason they think that if they hate women, then every artist on Subnoize must sing about hating women. Even beyond the occasional misogyny the album lacked spirit. The only time it did, it’s because it had song titles like “Reclaim the Throne”. Clearly, they weren’t over the whole D&D thing.

From the beginning there is a suicidal fatal darkness to this album that never lets go. The opening track goes off about emotions and fear. “The Shining” talks about a spinning world that makes you feel lost. Just look at the song titles from that track on – “Devil”, “The Predator”, “Chemical Imbalance”. Swollen aim for a balance between the murder raps of Necro and the depressive introspection of Sadistik – self-harm as a sign of strength.

The result is absolutely badass and fun. It’s over-the-top, yes, but its darkness doesn’t mean a lack of fun. Swollen just trade in being warriors to being creepy dudes. “Night Vision” and “Chemical Imbalance” are the pumping heart of the album, where Mad Child swings from self-hating to bragging, often in the same line. You can hear his passion, too. He repeats the same rhymes a few times, but its his fury, his anger, how it’s directed at everyone (including himself) and no one at the same that makes the verse of “Night Vision” one of the best verses in Hip-Hop ever. Some rappers may have written more clever rhymes, but such passion is rare, especially in Boom Bap.

You can also look at this album as not just Swollen taking their style to the extreme, but also pushing the Boom Bap genre to actual darkness. Rob the Viking also shines here, knowing that the lyrics would be nothing without creepy sounds. While they don’t really go the danceable route – “Fire”, “Sound of the Drum” and “Devil” are the only times they raise the tempo and let the drums kick hard – he creates great soundscapes. Odd, unclear sounds surround these songs. A generator-like hum makes “Night Vision” way creepier. Rob knows that if the drums don’t take a central place, something else must. His atmospheric is actually atmospheric and enveloping. Calling it ‘camp’ is just silly. There was no other way of achieving this besides piling the odd noises.

Mad Child is the star here, which can sometimes be sad. All of the struggles he talked about in Armed to the Teeth are here out in the open. It might as well be an exorcism of his demons. Some songs are solo, like “Chemical Imbalance”. That leaves Prevail a bit in the dust, since his lyrics don’t have that personal nature but just cool imagery of satanic rituals, killing people, the undead and general darkness. He can never capture Mad Child’s fury who raps like a man possessed. It’s most apparent in “Night Vision” where his verse is almost useless. That said, he’s still an integral part. Without him this would become an incoherent and self-centered work. Prevail’s slightly more lighthearted approach is necessary.

The best thing about this album is how it manages to be unique, a whole piece without straying too far. Traditional Hip-Hop is an extremely minimalist genre so you get a lot of rappers saying nothing over white noise. It’s almost frightening how similar most of the canon is. Swollen Members don’t pull any tricks here, it’s just they got a more interesting concept and more passion. In the end Hip-Hop is sound art, and no matter how clever your lyrics are you need passion and to rap with conviction. Dagger Mouth is a strong contender for the best Boom Bap rap album ever. It actually takes advantage of the genre’s style and limits. It uses the minimalist beats to let the rappers go crazy, so the rappers actually go crazy. At the same time the beats remain important, providing odd sounds that change the tone of the songs – whether it’s the aggressive “Night Vision”, the moody “Chemical Imbalance” or the self-congratulating “Mr. Impossible”. I want to blame Subnoize for this album’s lack of success, but then again if they didn’t shat out Armed to the Teeth they wouldn’t feel the need to apologize and make a glorious comeback.