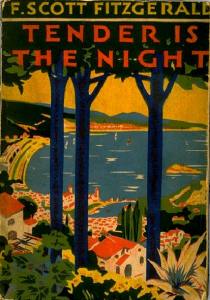 The same warning signs that told me Frog Music is an abomination appear again. The first sentence is stiff. We spend a whole page setting a scene, but the atmosphere isn’t interesting. I know France is an exotic, exciting place. This cliche was boring the first time I read it. Characters appear, and we get their visual descriptions first of all. There is no reason to picture a character in one’s mind if you haven’t given a reason to care about them.

A little later we meet more people. We’re told who’s unpleasant and who’s not. What separates the Divers from the rest isn’t very clear. Dick wears a hat, that was clear. Other than that, Rosemary just tells us how amazing and cool and fantastic they are and how she loves him. It’s another romance where people fall in love at the first sight.

Maybe if Rosemary was developed, I could connect this odd behavior to something. There is something with her mother, but Rosemary’s main role is to be a nail in Dick’s coffin, and to tell us how great he is. Her arc isn’t resolved. She vanishes when Dick decides so. It’s okay to have characters whose main purpose to help push the protagonist somewhere, but even side characters are people. When they act odd, we’ll want an explaination.

From here on out Tender is the Night is a predictible ‘literary’ failure. The main character hits the bottom with alcohol. There are a lot of psedo-philosophical passages trying to explain the relationships between the characters using sentences that are much longer than this one. It’s like The Golden Notebook, with weaker prose and less imagination. There is a lot of telling how the characters feel. You will also be told, over and over, how exciting, exotic and foreign France and Italy are.

I read this story of a rich man going down his spiral with a glass of whiskey before. It was called Appointment in Samarra. It was just as shallow, but O’Hara didn’t cover up his story with such stiff writing.

I wish I could find a reason why Dick reached the bottom of his spiral. I know why the protagonist hit the bottom in that Nine Inch Nails album, and it’s not even marketed as a rock opera. If Reznor can use a few lines to make us understand the downfall of a man, why can’t Fitzgerald?

There is a bit of a Jesus complex here. Dick is a man obsessed with saving people, especially women. This brings me back to my virtual days. Only, when I wanted so much to have heart-to-heart conversations with girls and help them with their issues it was because I wanted the same, or that I wanted power. I won’t start to self-psychoanalyze, but I could connect this ‘wanting to save people’ to a few inner attributes. Good superhero stories also relate this desire to save people to some inner struggle of the characer.

Throughout the book I kept waiting to see what was Dick’s flaw. I waited for the chink in his armor, the same one that made characters like Max Cohen so great and fascinating. I couldn’t find it. Again, it may be the drinking, but that’s external.

It’s hard to be emotionally invested in a man falling down for no reason. It’s sad, sure, but how do you relate or connect to it? A man falling down is no different than a stone falling down. They’re both objects trapped in Earth’s gravity. Humans tend to have much interesting reasons for falling down than rocks, but you wouldn’t know it in Tender is the Night.

I don’t even know what spic means, but I could tell from the context of the conversation that it’s not synonymous with “The guy makes me wish I was a homosexual”. This is how you show a person is ‘frantic with jealousy’. Why was that extra line necessary? Nowhere in the book it’s implied that Dick is a masochist, so telling me he didn’t want to be hurt again is like telling me there’s nothing wrong with his digestive system.

“He left a call for noon, stripped off his clothes and dove literally into a heavy sleep.”

What is the word ‘literary’ doing there? How do you ‘dive’ metaphorically? After all, diving is either plunging into water or to fall head down through the air. It’s like saying ‘he literally bit the steak’. It’s an extra word, like a lot of words.

That’s the biggest problem with the novel. It has a lot of words and complex sentences, but none of them lead anywhere. It’s a rambling novel, but its ramblings are closer to King’s Cujo than Catcher in the Rye or any Paul Auster novel. Fitzgerald’s crazy relationship with Zelda is always brought into the disucssion, but it doesn’t give new insight to the novel. It explains why it’s so bad.

Catcher in the Rye and Something Happened felt like they came from deep pain, but they trapped you in the character’s heads and made you feel what they feel. They weren’t written to tell a clear story but to tell you what it feels like. Tender is the Night tries too hard to tell a steady story, but its writing style is the ramblings of a depressed.

Depression rarely produces coherent pieces. It can produce emotionally powerful ones, but music albums like Saturday Night Wrist take advantage of the messiness. Tender is the Night tries to find order in something chaothic, and all it does is make the chaos lose its meaning. It refuses to speak with it on its own terms. It’s a conversation where the people speak in different langauges, only without the humor.