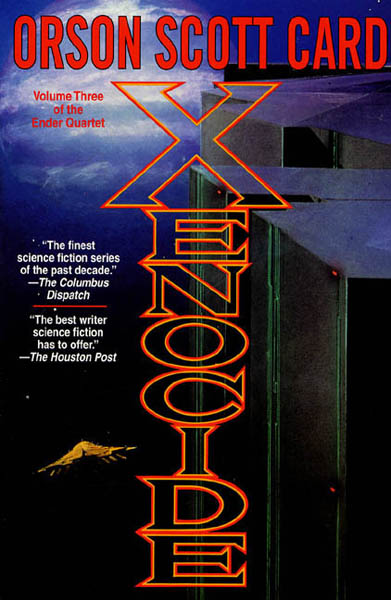 Don’t we all want to believe in the myth of the free artist? If only we break the chains of record labels and publishing companies! A truly great author doesn’t need a pest of an editor. Their glorious minds just spill diamonds on the page. Really, this is an attractive fantasy. It means we can just write whatever the hell comes to our heads and it might be brilliant. We don’t have to actively seek criticism and feedback, since that will soil our purity.

For every brilliant album like The Fragile, you get a book like Xenocide. Actually, Dr. Dre was invovled in “Even Deeper” so maybe even that album isn’t a product of a single, untamed genius. Human beings are flawd and social animals. Without feedback or criticism, our ideas don’t improve. Becoming intelligent is no different than working out. You have to practice. You have to up the ante and you have to try new things and hear the words people different than you.

Card is clearly intelligent or else he wouldn’t be able to write the two previous novels. They were vastly different in style and were self-contained. There was an overarching story but the books weren’t separated just so it would be easier to sell them. They had a beginning and an end, different prose styles and different structures. That’s all before you get into how Card explores his ideas, how he focuses on characters and refuses to demonize everyone. These things are here too, only Card has no one to restrain him.

Lack of an editor doesn’t mean Card’s good habits can flow freely. It means he sinks to the sin of overwriting, joining the ranks of authors like King and R. R. Martin. He rambles on for most of the books, talking to himself and writing down notes. There so many passages that fit more a stream-of-consciousness narrative but this clearly isn’t one. The narrator is omniscient and the stream of thoughts don’tm provide any psychological insight. It’s a reptition of things we already know.

He’s similar to R. R. Martin not just in the rambling style, but in how the rambling holds the book back. When ramblings aren’t poetic or insightful, all they do is fill up the page and cause build-up. Build-up isn’t a good thing. There’s no reason to tease the readers with ‘something will happen!’ when it’s possible to write interesting things that are happening right now.

Only in the last 100 pages things are actually happening. Until then, people mostly speculate. Although there are many characters, the speculations aren’t patricularly varied. People mostly think about what happened, what may happen and what are the odds of something happening. It’s an author not sure how to move his story, so he writes neutral, meaningless things.

It’s tempting to write these paragraphs. Looking at how many words you wrote brings a feelings of satisfaction, of having done a work. Lying bricks in an order doesn’t automatically lead to a house. Writing a lot of sentences doesn’t automatically lead to a story or an essay or insightful philosophical musings. Card’s prose is more nimble and easy to read than other ramblers, but making it more pleasant doesn’t make it any less of a ramble.

The worst sin Card commits is lacking any purpose to his story. What’s Xenocide about, in the end? What does it add to the world of Ender? We shouldn’t judge other people too hastily. People may seem immoral to us but perhaps their value system is vastly different and we need to find a bridge. There’s no progression of ideas here from the previous novels. For all of its philosophical musings, the novel is empty. The only thing that happens is that the characters confront a virus, discover faster-than-light travel and start to rise against Starways Congress. Does that sound like a story that needs 600 pages?

The novel was apparently meant to go hand-in-hand with Children of the Mind but they were split in two. Whenever a book needs to split up because it’s too long a red flag rises. That’s a sign the story doesn’t actually end in the book itself (Here, it hardly concludes) and that the author found themselves writing a little too much.

The usual strengths are here. Although Starways Congress are the first actual antagonist in the series, Card generally refuses to paint people as wholly evil or wholly good. Characters are conflicted. People do horrible stuff and later Card makes us understand them without justifying it. The idea of ‘varlese’ is pretty brilliant – accepting that sometimes we have to kill a different species because we fail to communicate but not because they’re evil. The novel never develops these. We don’t get anything like the piggies’ radical view of death.

There’s also more techno-babble this time around. Expect a lot of ramblings in the last 100 pages about Outspace and Inspace. It’s good he doesn’t pretend this is hard science and the philotes are more of a philosophical concept than a scientific one. But Card spends more time telling us how it works and none of it is barely cool enough for Stoner Rock lyrics. Again, it’s an author whose pen are getting away from them. No editor was here to cut off the fat and leave the substance.

Normally these are the worst flaws a book can commit. Offend the reader, but at least be interesting. Boredom cannot be forgiven. Boredom merely kills the reader’s time and no one lives forever. Yet Xenocide is, overall, a bearable book. It’s not very enjoyable, but it’s never offensively boring. The rambling prose fattens the novel, but it never becomes a struggle to read. When things do happen, they’re interesting.

That’s thanks to Card’s great foundation. He always comes off as a compassionate, wise person in his novels instead of a homophobic conservative. The world is still dominated by concepts and ideas, rather than trying to predict hard science. There is still no main character, but a wide cast. Some get more focus than others, but each is given a rational basis for their actions (Although Quara is a bit dramatic). Card never demonizes anyone.

Such tiny merits manage to make the book fairly pleasant, if not great. It’s a huge step-down from Speaker for the Dead and makes me wonder if this is where the series ran out of steam. Still, Card manages to ramble and focus too much about build-up and avoid writing a horrible book. That takes some skill. There’s nothing here unless you really loved the first books, but if youd did the ride may be pleasant. Hopefully the sequel is worth it.