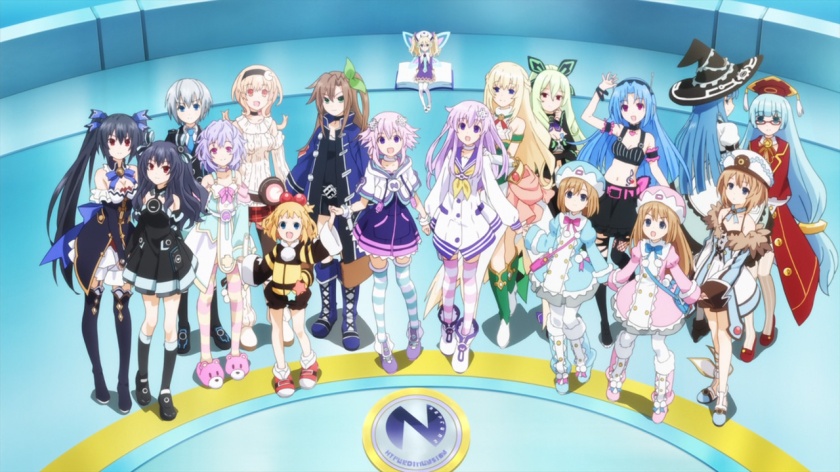 The problem with Neptunia isn’t that the source material doesn’t translate well to anime. The problem is in the process after translation. The content translates smoothly, but there’s just too much of it and the creators can’t make sense of it.

They did make some brilliant decisions. The anime jumps headfirst into the story without exposition. It doesn’t need to. Introducing characters is pointless. If your characters are developed enough, just show them walking around, talking and doing things. We will learn about them as the plot goes on.

That movie is brilliant and works. The cast is wonderful. Most of them are archetypes, but they’re deliberate. The key to making these archetypes work is how they relate to their environment. Blanc is your flat-chested stoic girl, but in a happy-go-lucky world she sticks out. Vert’s breasts are an extension of her motherly persona, which sticks out when everyone around her are children. Neptune is the embodiment of the franchise and, in a satirical way, the audience. She’s a lazy airhead who just wants to play games and can’t take anything seriously.

Even when characters are similar to each other, there are differences. Uni  is a tsundere like Noire, but she doesn’t have her position of power. So she’s more friendly and easier to get along with. These personalities constantly clash and interact. Although the anime throws all kinds of external challenges at our cast, it never feels like they drive it. Every line of dialogue, every act is modified by the personalities.

That’s why the move to more serious ground isn’t stupid. You don’t need realism for effective drama, but characters who feel real enough. The cast of Neptunia is strong, but the poor pacing throws drama way too early. As developed as they are, we still need some time to get to know the cast. There are about 8 characters so, and you can’t make the audience know them in just 6 episodes (especially when there are plenty of action scenes). Already around episode 5 or so, we get dramatic scenes, the world on the brink of extinction and nobody laughing.

The drama is ineffective both because of its placement, and how it’s handled. The drama is too serious for its own good. The creators forget they’re dealing with a world inspired by gaming consoles. It’s not like the introduction of seriousness also comes with extra thematic depth. If your drama doesn’t add any depth, just make it as over-the-top as the show itself. It also appears too early, way before the viewer can get a basic understanding of these characters.

A departure scene later in the series is great, but that’s because it doesn’t rely on the characters being serious. By the time it arrives we know the characters much better. We saw them on various adventures and learned how their relationships work. It’s also more subdued. The previous drama scenes were overly serious but not over-the-top. Since this one is more subdued by nature, it can tone the ridiculousness down without losing any effect.

The franchise’s premise doesn’t sound like it’ll be friendly with tonal shifts. Still, it’s easier to make you care about a bunch of weirdos than it seems. The pacing is too brisk though. The show keeps throwing events and interaction and jokes at you and there’s never time to take it in.

There are no build-ups. The story doesn’t build towards a single conclusion. Rather, it follows a collection of arcs that end with the a Huge Dangerous Object. If the series built up towards that conclusion, then the fast pacing would have been easier to take. Since the arcs aren’t really connect, it’s like a show is constantly on fast forward, jumping from one idea to next and showing only beginnings and conclusions.

The brisk approach also works against the aesthetic. Neptunia‘s style is cutsie and bright, sometimes too much. The voice actors, especially Neptune’s/Peashy’s/Abnes’ are trapped with a pitch that’s too high. Their performance is suited well to the characters, but plenty of times I wished they’d put on some effect to lower the pitch. It was too much on the ears. Blank and Plutia are a blessing just because they speak in a calmer manner. If the series was a little slower, then the voices wouldn’t feel like an assault. It does get better in the second half though.

Despite this small bump, the aesthetics are still one of the franchise’s strong points. The character design is astounding. Every character looks distinct. Even characters who are meant to be similar have their clear and subtle differences which make them unique. The show is moe, of course, but it finds so many variations on it.

There’s also the aspect of fanservice. While there are a few uncomfortable moments, the fanservice is well-integrated most of the time. The character design is beautiful, and but the series rarely slows down just to remind us that. It always constructs scenes and shots that both advance the story/characters and let us enjoy the view. It’s also never too profane. The sexuality is elegant, never shoving itself in your face. The characters just happen to look good. The ‘fanservice episode’ is a great example how they do it, and also of the self-aware humor.

One thing the anime lacks, compared to the source material is the self-aware humor. It surfaces occasionally and it’s always better than expected. The fanservice episode was great, poking fun at tropes but integrating the personalities into the humor. There isn’t enough of it though. I understand the fear of breaking the fourth wall. It can easily slip into trying too hard. Just look at Deadpool. Neptunia doesn’t have Deadpool‘s macho bullshit, though. It never pretends to be cool (It disregards coolness completely. That’s why everyone is feminine but also sexualized), so it can run wild with the self-awareness. It’ll just be a part of the general absurdity.

It’s a curious thing. Here in the West we want our heroines gritty and tough. We love Furiosa and Rey for how macho they are. They scream at men to stop holding their hand and don’t wear skirts. Yet here we have Neptunia, which is a big franchise where all the heroines are unbashedly feminine. There are no apologies here. How can they create a diverse cast of females with both great looks and great personalities while Hollywood directors struggle with one heroine? It’s so pathetic to praise Black Widow when we have the whole cast of Neptunia.

The anime is fun, but it feels like there’s more to do with the franchise.