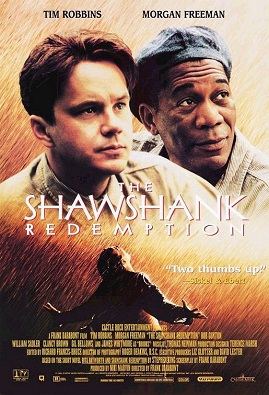 Stephen King is an awful storyteller, but he has good ideas. I hoped that translation to the big screen will do his stories justice. Plenty of adaptions of his work won critical acclaim, so I sat down, sure to enjoy a good film. I didn’t expect Shawshank to be brilliant, just good. I didn’t expect to fall in the same way King fails.

It hints at first it may a sort of Full Metal Jacket in prison. The introduction of Warden Norton (Bob Gunton), the way the old inmates abuse new inmates and the performance of Tim Robbins in the first scene (Playing the main character, Andy Dufresne) all point to an emotionally gripping and complex film. The direction keeps pointing at that, too. The small moments of banter between prisoners is always on the verge of revealing the characters. As it goes on though, the film reveals there’s nothing beneath.

The Shawshank Redemption is as blunt as a hammer. There is no theme to explore. There are clear, good guys who may regret their crimes but that’s enough. There are evil people who are evil because they’re evil. There’s narration all over the film, to make sure you understand also what the film means. One of the film’s only bright spots, how institution like prisons can make to dependent on them is given that treatment.

The film quickly puts a dichotomy of poor, oppressed prisoners and evil guards. Prison life is awful, but some of the people in it are there for a reason. The inmates themselves are also some of the reason prison is sometimes pointlessly cruel.

There’s no exploration of that theme here. Prison is just a stand-in for an oppressive environment. The film touches on prison rape, but the people who do it are just monsters. They have no character. There’s no reason for them to do it beyond pure sadism. Even the narration tells us.

Warden Norton could have been an interesting character. He’s not given a cruel set of morals though. He’s just evil. Like all bad villains, Norton has no reason to do what he does beyond being evil beyond a shade of a doubt. Even selfish people have a reason to do what they do. Norton could have been an exploration of Christian hypocrisy (Which the film suggests and then drops) or of selfishness and too much power. Norton isn’t given character time to help us understand them. He does his evil things so we could rejoice in his defeat.

The Drill Guy from Full Metal Jacket also received this treatment. That’s to give us the same distance the soldiers have from him. We saw the whole thing from the soldiers’ point of view. The Drill Guy seeemd like an alien, distanced presence because that’s what he was trying to achieve. Jacket also has the satirical edge, which excuses that. Shawshank always hints at character moments. It’s a serious, deep film. The main character gets close to Norton. Norton is a human being, yet the film treats him like he treats the prisoners. Two wrongs don’t make a right though.

The prisoners are also just as one-dimensional. Once the film is done with the rapists, the prisoners somehow stop being assholes to each other. Worse, we’re never given any insight into who they are. A story about a prison full of well-meaning guys can be convincing if the characters are there. Any time that banter starts between the prisoners, the scenes end. There’s no oppurtinity to learn about them.

Andy and Red both don’t have characters. They’re both educated prisoners, but that’s it. The first scene hints that Andy may be a troubled man with a unique personality, but when he reaches prison there’s nothing to him. Freeman also doesn’t add anything to his character beyond his general charisma. Robbins’ acting is especially disappointing after the first scene. He doesn’t even try to capture the anxiety, anger, and all the other emotions he expressed in the first scene.

It’s a shallow story based entirely on emotional appeals, and good guys versus senseless bad guys. The final half-hour is especially bad. Stories end you wrap up the themes, not when the life of your character stops being interesting. What Andy does in the end tells us nothing, not about his character or about his themes. Remove these 30 minutes, and the film wouldn’t lose its meaning.

The only good arc is Brooks (James Whitmore). Brooks has character, and his story has actual themes. The way some people become dependent on such institution was an original theme I haven’t encountered before. Sadly, it’s not one of the central themes. It’s just one for one arc that exists to push Andy further. Why focus on Andy though? Brooks’ arc is more meaningful and well-developed, and when it ended it truly felt like a proper place for a film to end.

The Shawshank Redemption is a typical acclaimed film. It’s serious and deep, but it’s all on the surface. Warden Norton is a comic book villain. Andy is a poor oppressed prisoner who is also smart. That’s the gist of it. Perhaps if it didn’t pretend to be so deep with all these profound sentences, I could have said it’s a fine, entertaining drama film. Instead, it’s a film that doesn’t even try to be good and fail. It’s a film that thinks appearance is enough.