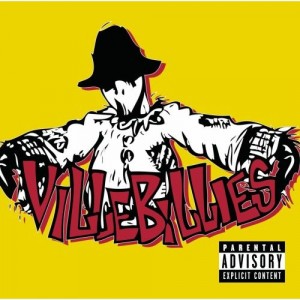 Only now I understand why a serious Country Rap movement hasn’t emerged. These genres are perceived as targeting very different demographics. Country is for white rednecks who probably never seen a black man, and rap is for black people, preferably ‘real black’ who don’t act like whites (Also, white rappers try to be black and steal black people’s music). Even weirder is that whenever there were attempts to merge the two genres, they came together so smoothly. They blend together even better than Rap and Rock. There were Nappy Roots, who have some Country influence and a few OutKast singles, but VilleBillies are a full-on Country Rap band.

It’s not a gimmick, either. The band shows perfect understanding of both genres and why they work. The rhymes are often simplistic, but they sound like people who did listen to a lot of rap, and they have no problem using different flows and styles. There’s fast rapping on “Whisky”, laid back on “Rolling Stone” and energetic on “I Got Moves”. Same with with the country elements. They know Country music is not just sticking acoustic guitars, some sliding and a banjo there. It’s not exactly the Alt-Country of Drive-By Truckers (There isn’t a lot of rocking), but they borrow the simple and catchy melodies of Bottle Rockets and the O Brother soundtrack. In some places, it’s more of a Bluegrass-Rap record than anything, sort of like Old Crow Medicine Show with breakbeats and rapping.

All of these makes for a very strong set of songs. Only “Mr. Brown Bag” and “Hey” are a drop in quaklity, and both are from bad either. The former has a fairly weak chorus, and the latter is a fun experiment in Punk that’s just not as attention grabbing as anything around it. The highlights though are just brilliant. “Whisky” is one of the best tribute to the distilled beverage, “Greatest Moment” is a perfect closer, “Mary” has the best melody and “Rolling Stone” is just gorgeous. No obsession over a song lasted as long as that one.

An underrated, brilliant gem. The band is still extremely unknown, but I’m glad that, at the time of writing, they’re still together.